A Little Help from Your Friends 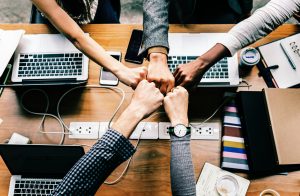 Sometimes you need a little help from your friends.

Ever notice when some guru or internet marketer has a new book or program, you get email after email from different people telling you about the new offer? “My friend so and so just wrote a book and you can get it for **this special price** for the next 48 hours.”  Those are affiliates. Depending on the deal, they may or may not get a piece of the action or a dollar amount per sign up. They might just be doing a send out for a friend. (That would be your real friends.)

I’ve been scratching my brain lately over any number of book selling conundrums but the one that really has me thinking is how do you sell books when you don’t have a platform? You’re not rich or famous. You email list is under 500 names, maybe under 100. Your Facebook friends really are friends, not a collection of strangers that you trade memes with. You don’t have a following.

But you’ve written this book and you’re about to release it and you realize you have no idea how to market it.

My first instinct is to tell you not to release it until you’ve built a platform, people who might actually buy your book. But you won’t listen to me and I get that.

If you don’t have a following, you’re going to have to borrow or buy one. Today, let’s just focus on borrowing from a friendly source.

You Gotta Have Friends

If you have friends with followers (i.e., a list), that your book would appeal to, you should ask if they would do a send out for you.  Some will, some won’t.  For any number of reasons. Maybe they know your book won’t appeal to their followers. Or maybe they are already scheduled for another promotion and they don’t want to promote two things at once to their list. And some just can’t be bothered.

That’s why you need to do a Smart Ask. You want to make it as easy as possible for people to say yes to you.

First, give them some advance notice – don’t just spring it on them  a day or two in advance.

Tell them a little bit about the book, what it covers and why you think it would appeal to their followers. Some might want an electronic copy of the book to read or skim so they know what the quality of the book is. No one wants to promote a poorly written book  to their list.

Let them know that you have pre-written 3-5 emails for them, with the link to the book already set in there. If they want to personalize it beyond adding their name at the bottom, they can. They don’t have to send out the entire series if they don’t want to. You’d appreciate anything they do.

After the send out, DO send them a printed copy of the book as a gesture of appreciation. And be prepared to return the favor.

You’re going to have to start early or delay your release for this one.

I’d make a list of 100 influencers – people I don’t know or only know tangentially. And I’d start a relationship. Comment on their blog or review their podcast. Follow them on social media and comment positively. (No obvious sucking up, please.) Share their posts. Get into forums or groups where my target audience hangs out and where the influencers are.  In short, I’d get on their radar.

And I wouldn’t ask for help right away. I’d build the relationship. I would see where I could help them first. I’d add value where I could.

And a month or two (or three) down the road, I would mention my book was coming out. If I had built up the relationship well enough, I would ask if they would send an email or share a post on social media.

People will generally do at least the minimum on an ask; some will surprise you and do more.  But it’s not something you have control over and that is a problem for me. I like to control as much as possible when it comes to my business and my life. (Yes, there might be a reason why I’m still single.)

Marketing Your Book is Up to You

Self-published authors need to think outside the box (and across the ceiling and around the corner) to market their book. The books that I work with are meant to be marketing tools for the author’s business. They are not putting the book out to collect royalties. But they still want their book to be seen and bought by their target market. That takes a solid marketing plan. And sometimes a little help from your friends.