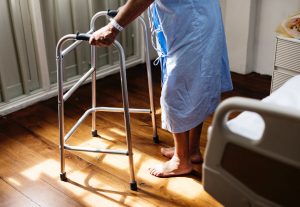 I’m sitting in a hospital room, listening to my friend softly snore. He had been awake since 1 am and finally drifted off a little after 7 pm. And of course, within 15 minutes, his IV alarm sounds. I choose a button hoping it will silence the noise. I must have hit the right one—the IV is still dripping and the noise went away. A few minutes later his phone goes off. I quickly flip it over and the call goes to his voice mail.

There is always noise. Sleeping in a hospital is like sleeping on a plane. It’s not real sleep, just sort of an in between worlds. There are carts and voices, elevators dinging, calls over the PA, though not as many as there used to be.

He is very sick. Or he’s not. Maybe there’s a blood clot; maybe it’s scar tissue. His kidney function is way down. No one knows why. Nothing will be determined until some tests are run on Monday. That will be eight days after he was admitted. His arms are covered with dark purple bruises from needle sticks (14 tries one night before they found  a vein). Sometimes he bruises just from someone touching him.

He craves showers and washing his hair. He has learned how to turn off the alarm that notifies the staff if he gets out of the bed. He has learned where they store the contacts and the batteries for his heart monitor. He engages everyone he can in conversation, learning as much as he can about their work, what they do for fun, where they went to school, what they’re studying, where they are from, all about their families. The hours in a hospital drag.

He is wildly entertaining, incredibly verbal. Sometimes so much so that I gape at him in wonder (and annoyance), then ask, “How can so many words fall out of your mouth?” He tells stories in exact detail. He is experiential which means he experiences things all over again as he tells you about them. He has to go through the entire story; there are no short cuts, no cutting to the punch line, no interruptions allowed. Some of the doctors and nurses are okay with this; others are less patient. They don’t get it. Or him. We don’t like them.

He is not an easy person. He is confident, probably arrogant. He is loud. He once spoke to hundreds standing on a table in Las Vegas—no microphone needed—and  held them spellbound. He knows how to make his voice boom, how to make his voice shake and rumble and roar. Sometimes his voice drops to a conspiratorial whisper. Then his eyes crinkle and twinkle and he smiles and he laughs at his own joke, even though he has often told me that a speaker should never laugh at his own jokes. I laugh at my own jokes, too.

So this man, my friend, who holds worlds of experience, who has literally made and lost millions in his lifetime, is now in a battle for his life. He is afraid and he’ll tell you that he’s afraid. I’m afraid for him. We know it’s a war we all lose but we are determined, he and I, that he will not lose this particular battle.

He wrote a book and it’s one of my favorite stories to tell.

He was speaking to a group on real estate financing – how to use notes and other forms of paper (it’s called paper in the financial world). He’s a born teacher and he loves to speak and expound, and may, this one night, have gotten a little carried away. At the end of his talk he said, “I’m writing a book on this very topic. If you like what you heard here tonight, go see Angel  [his girlfriend] in the back of the room. The book is going to be $50 but if you buy it tonight, it’s $25. The book will be ready in two weeks.”

And people went to the back of the room and gave Angel cash and checks and their names and addresses. As they drove home, Angel counted the money—around $1,600 if I remember  the story correctly—and commented, “I didn’t know you wrote a book.”

He sat down and eleven days later he had a pretty good book. They printed copies out on a daisy wheel printer (you kids can go Google that), and mailed out over 60 copies of what would become a classic among real estate investors. It sold thousands of copies over the years and a re-release that we did last year made the top 10 in several categories on Amazon with a very small marketing push and a very ugly cover.

I realize, watching him sleep, exhausted and worn, that I need to record these stories of his so his grandchildren will hear his voice and his son, who is working on the family genealogy, can fill in the blanks. I wish that I could record him telling the stories directly to his grandchildren. I picture them all on a couch in front of a fire, the kids listening as spellbound as those investors in Vegas, his son and daughter-in-law looking on contentedly. It’s a Norman Rockwell image in my head; a fantasy that will never happen.

So, when we haul his old, tired butt out of this hospital, I’ll start the recordings. Maybe his family will like them, maybe not. I like his stories and that’s enough.