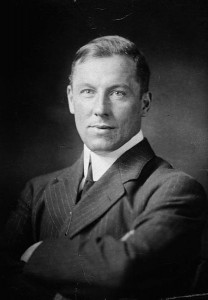 A friend recently posted a link to Robert Service’s poem, The Men that Don’t Fit In. It’s a poem about never quite finding your spot in life, never belonging and never reaching your potential, perhaps because you are always looking towards the next thing.

Today we would say they have “Bright, Shiny Object Syndrome.” They jump from thing to thing, never quite completing a project because something newer, better has come along. I know I have quite a bit of that going on myself.

But sometimes you jump from shiny object to shiny object because you are afraid of failing at something you really want. You don’t want to admit that you gave something your all and missed, so you don’t give it your all. You go to the next thing and start that and escape possible failure.

I have had some colossal failures in my life. It hurts like hell at the time. And the really big ones hurt for quite a while after! And even as I write that sentence, I smile. Why?

Because there’s a certain satisfaction in being able to say, “I gave it my best shot.” Oh, you learn a lot. At this point, I should be about the smartest person in the world. But to me, if you don’t try big, you don’t live big.

In the poem, Service says “It’s the steady, quiet, plodding ones Who win in the lifelong race.”

At a certain point, if you want to be successful, you need to focus. You don’t necessarily need to be brilliant, but you do need to be willing to put in the time and effort to see an idea through. Service spent his early years wandering from thing to thing before he settled into writing. I think he found a mix of wandering and plodding that worked for him.

If you’re suffering from Bright Shiny Object Syndrome, here’s what I tell my coaching students: Choose one. And for your first project, choose your second or third favorite idea. Because working on your dearest dream is going to trip you up. You are going to want it too badly. You are going to need it to be perfect. And you won’t get it done. Not the first time out. Maybe not ever. And certainly not until you learn the discipline of plodding your way through an idea and giving it every chance for success.

So choose one. Today.