How to Become Famous

“I always want to say to people who want to be rich and famous: ‘

try being rich first’. See if that doesn’t cover most of it.” 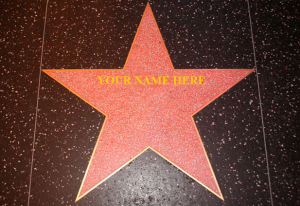 There is the recognized-by-everyone famous that comes with being a major entertainment or political figure. Think in terms of George Clooney, Julia Roberts, Queen Elizabeth (the hat is the giveaway there). This can also include people who are just plain rich, either through their own endeavors (Bill Gates) or through the sheer genius of choosing the right parents (Paris Hilton).

Then there is the famous-in-your-field which is usually an indicator of a high level of achievement. It encompasses the respect of your peers and acknowledges your contribution to the field.  Maryam Shanechi (of USC) and Edward Change (of UCSF) led a team of physicians and engineers in developing a novel decoding technology that will lead to developing new treatments for people with mood and anxiety disorders. Never heard of them? Me, either. But you can bet people in the field of neuroscience have. (You can read up on them here.)

And, for most of us, there is the known-in-certain-circles-famous. This could be the city councilman or this year’s high school football star. Maybe you are asked to give a talk every year at an association dinner or won your local Toastmasters award for most humorous speech. While this can be gratifying—it’s always nice to have some recognition—it can also be frustrating if we want to break out of local circles and spread our wings as well as our message.

Now I listed those backwards, from most to least, because really, fame is about climbing a ladder. You start at the bottom as an unknown entity and you move up, sometimes rung by rung, and sometimes you’re able to move up several rungs at once. But you start where you are.

Side Note: Okay, at this point in my writing, I looked up the game Chutes and Ladders to see if I could come up with an analogy. I stumbled onto an analysis of the game on the very fun site uncyclopedia.wikia.com which takes the premise that Chutes and Ladders is a metaphor for life to the nth degree. While this is a satirical look at Chutes and Ladders, the game originated as a way to teach morality. And yes, there are way too many scholarly papers that have expanded on this premise, to no useful purpose. Go with Uncyclopedia; it treats the board game with the seriousness it deserves.

Let’s just say that sometimes people jump up in fame and stature, from being known-in-their-field to being recognized-by-everyone-famous. Think Neil deGrasse Tyson or Brene Brown. (May I point out that they both have written books?) Some people are thrust into fame due to circumstances beyond their control such as Chesley “Sully” Sullenberger, the American Airlines pilot who made the miraculous landing on the Hudson. (Who capitalized on his fame by writing a book AND had Tom Hanks play him in the movie!)

I’d like to point out that all of these people are damn good at their jobs. Fame, like luck, is often the result of opportunity meeting preparedness.

What level of famous do you want or need to be?

Some of us crave fame. But when fame alone is the goal, it is always shallow and often fleeting. Without a message to share, you’re basically famous for being famous. The Gabor Sisters were in on the joke; the Kardashians… not so much.

But for some of you, that’s okay. Go make a sex tape. Just know that in the zombie apocalypse, your brains will be eaten first.

For the rest of us. If we are serious about this, we need to think this whole fame thing through. Bill Murray has made his peace with his fame. But ask yourself, do you want to be hounded every time you go to a restaurant or step out of your house to walk the dog? Are you ready to have your looks, your clothing choices, where you choose to shop put under the microscope? Can you be nice ALL THE TIME?  (The answer is probably no. We all have bad days. Even Bill Murray.)

But we also know that having a modest amount of fame will help us broadcast our message and gain more clients. Most of us want to be famous-in-certain-circles and that is achievable.

Step 1:  Do something fame-worthy

Step 2: Craft a message that resonates

Step 3: Network yourself up

Overnight Success is a Myth

We’re all adult enough to know that overnight success is almost always the result of years of hard work. The good news is that communication channels have become much faster than they once were. We have 24 hour news cycles that are always hungry for a new story; magazines that publish new content online every day instead of publishing a glossy print edition once a month. You can now write and publish a book in a day (although I don’t recommend it) instead of waiting over a year to publish traditionally. One of the fastest ways to fame these days is to land a TED talk—and of course, be charming, humorous, and knowledgeable in that talk. But you don’t land a TED talk without laying a lot of ground work first.

You can leverage the tools that we have now to speed up the process of becoming famous, to jump up several rungs on the ladder. You can even do it with a limited budget.

But that doesn’t negate the fact that you need to bring something to the table. There are enough empty suits running around the internet or jumping around stages trying to convince you to part with your hard earned dollars. Don’t become one of them.

Fame is a Fickle Mistress

And, of course, fame is fickle. I once sang with Billy Squier (at a beach barbecue and no, I don’t really sing). Apparently he had a couple of hit songs in the 80s and I crossed paths with him around ’92. He was on our ship (fewer than 100 people, passengers and crew) so it’s not as if he was hiding in the crowds. However, it took us at least 3 days to figure out who he was and most of us were only vaguely aware of him. (Very nice man, just so you know.) He went from being fairly famous (for more than 15 minutes) to singing with me (he is such a climber!) within 5 years. (Did I mention I don’t sing?) And if you think I’m dissin’ on him for being a one or two hit wonder, may I point out that he is one of my few claims to fame? So where does that put me?

Which leads us to the old advice: Be nice to people on your way up because you will need them on your way down.

Yearning to be rich and famous? Or at least be known in certain circles? I can help you with a solid marketing plan that is Practical, Implementable, and Effective. Click here to find out more.