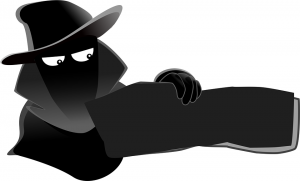 Poach my clients? Not a good idea.

Early on, I had someone in one of my networking groups poach one of my (small) clients. She represented a few hundred dollars a month to me. He charged a lot more and convinced her that more meant better. Maybe. Maybe not. All I know is that at a time when I really needed that recurring income, this guy came in and “stole” her out from under me.

Now, I didn’t own her. She wasn’t really mine, particularly if she was so willing to try someone else. And that’s fine. But it stung.

We all go to events—seminars, expos, conferences—hoping to make some connections and possibly gain a client or two. It’s a natural desire and a natural outcome of getting out and about and meeting people. So that’s not what I’m talking about here.

I’m talking about the people who go to someone else’s event with the express intention of mining it for clients.

I bring this up because an acquaintance was talking about attending an event that had his target market. (Good.) Then he said, “I’m preparing a special offer for the people at this event and I can fill my [$3,000] course that way.” (Hmmm.)

Now, I know that the person putting on the event, like everyone who puts on large events, had put a lot of money into it: hotel meeting room fees, advertising and promotions, the food and amenities at the event, A.V. set up, workers, etc. Small events can run $10,000 and up; larger events are easily in the hundreds of thousands. Providing breakfast and lunch for 50 people runs a minimum of $3,700 per day, usually more, depending on the hotel. That free coffee you’re sucking down? You don’t wanna know.

So, while it is appreciated that you bought a ticket, you haven’t invested anywhere near as much as the person putting on the event.

More often than not, particularly if the person who puts on the event has built a strong community, trying to poach his clients will backfire on you. You’re putting yourself in direct competition with the leader. My acquaintance said, “I can offer what he does for a lot less money, so I can help the people who can’t afford him.” (There’s a rationalization…)

First of all, why would people choose you when they are really there to see their hero? You will pale in comparison. Even if they can’t afford the guru, in their minds there will be a time when they can. Leaders receive emails and letters every day that say, “I can’t afford you right now, but I’m following you, learning from you so that one day I CAN work with you.” (And they appreciate those letters, just so you know.)

Don’t be THAT person

Hawking your services at certain events, like retreats or masterminds, is only going to make you look slimy or desperate. Or both. I have seen people shunned at such events. It’s very much a subtle thing; there’s no discussion. But no one wants to be around that person. It’s the idea of being judged by the company you keep. People just organically start moving away from that person.

So yes, you do spend good money to go to events and you do want to make some solid connections. You can do that without being predatory and unethical.

There Will Be Networking Opportunities

A good event promoter will provide opportunities for networking. Chris Krimitsos, who runs Podfest, one of the largest events for podcasters and YouTubers in the country, always includes a “speed networking” session, usually on the first night. Many events have a kickoff cocktail party the night before the official start. Attend this, even if it means paying for the hotel for an extra night. As with any networking event, remember what Bob Burg (Endless Referrals, The Go-Giver) teaches: You don’t want to sell to the people in the room. You want to make a positive impression on people in the room so that they might refer you to the 250+ people in their circles. If you want to learn more about that, go get Bob’s book, Endless Referrals. It’s a blueprint of how to network successfully.

What You Should Do Instead

If you want to gain clients at someone else’s event ethically, there’s a way to do it: Be a sponsor. Sponsor a coffee break. Sponsor a VIP luncheon. Sponsor the printing of the programs.

Or, sponsor a booth. Yes, it costs more to be a vendor, sometimes substantially more. But you also get a ton of perks. There’s almost always a display ad in the program; sometime there’s an additional write up in the form of an article or bio. Good promoters will have a contest that requires attendees to visit every booth in order to qualify for prizes. They’ll also mention the booths throughout the event and urge attendees to check them out. Some even build in specific times to hit the vendor area.

Having a booth also allows the people interested in what you offer to self-select and talk with you in a non-pressured environment. You can have a friendly chat, make a positive impression, and gain contact information to follow up. It’s a warmer lead than people’s business cards dropped in a jar for a raffle. (Which you should also do, by the way.)

Some promoters will also offer a five minute speaking slot to vendors to give a brief commercial. Some will offer even more time.

Which leads us to the next tactic:

It’s fantastic when you are asked to speak at a live event. You are immediately put in a position of authority. By having you on her stage, the event promoter has given you a tacit endorsement and you get a transference of her credibility to you. If the event promoter likes you, the audience is already warmed up for you. At that point, you just have to deliver valuable content that will help the audience and show that you know what you’re talking about.

Some speaking “opportunities” are really “pay to play” and traditionally paid speakers view this as an insult. If you’re a speaker who is in demand and command high speaking fees, then there’s no reason for you to pay to speak. People pay you. We like that.

But there are others who aren’t at that level yet (and who may never be). Sometimes you pay to play.

Think about what you might gain if you pay to speak:

Pay to play is not always a bad idea and sometimes it makes perfect sense. Consider what you will gain and balance it against the cost. In business, you have to spend some money to get your name out there. Pay to play might be a way to leverage someone else’s audience to cut the time it takes to get you to the point where you are offered paid speaking gigs. Or just make a name for yourself.

Eat What You Kill

Another speaking model at live events is the “Shell and Sell.” This is the model for those three-day seminars with four to six speakers a day. The speakers usually talk for 90 minutes and then sell you into a course, coaching, or their live event. There’s a set up at the back of the room where you can plunk down your credit card and buy what’s on offer. The speaker and event promoter split the money, usually 50/50 on courses, less on the promoter’s side if the speaker is offering one-on-one coaching or other high-touch service. How much money you make is dependent on your ability to sell from the stage (a very high-level skill), how large the audience is, how good a match your offer is to the audience’s needs, and whether or not your price fits into the audience’s economic status. Yes, that’s a lot of variables. Promoters of these types of events want speakers with a proven track record of closing at least 20% of the audience; 30% is better.

The caveat for both the Pay To Play and Eat What You Kill models is that event promoters are often overly optimistic about attendance numbers. You may put out money for travel, hotel, and meals and then end up speaking to a much smaller crowd than you were promised. Or the event may draw the wrong crowd for you. That’s part of the risk you take and it should be factored into your decision.

Go Forth and Connect

Go to live events and make connections. That’s perfectly acceptable and expected. But going with the express intent of taking advantage of someone else’s hard work is unethical and will come back to bite you in the butt. I’ve seen it happen.

Follow up: That guy who stole my $300 a month client? I later intervened when a friend of mine was about to hire him to the tune of $100,000 a year. I saved my friend from getting scammed and yeah, got a little payback.