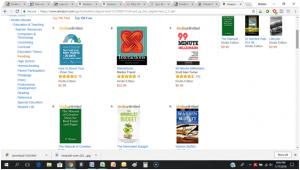 How hard is it to drive your book onto the Amazon bestseller list? This past week, I helped a friend launch a re-release of a book he wrote 25 years ago. We didn’t do a lot of prep and we didn’t spend ANY money, so this was not a full-on launch effort. How did he do?

First the numbers, then I’ll tell you what we did.

We published his book in Kindle and as a print edition. While his book probably didn’t crack the top 100 overall in Amazon, he made the top of the lists in his categories in Kindle. His book topped off at #4 in Real Estate/Buying and Selling Homes (his main category) and #4 in Education & Teaching/Teacher Resources/Funding.  Those are the two categories I chose when I uploaded his book to KDP.

Amazon will often put your book into one of its “hidden categories” if it looks like a good fit. So we also found ourselves at #5 in Education & Teaching/Teacher Resources/Education Theory/Finance.  That’s a pretty obscure category!

What I neglected to screenshot was his exact number in the Kindle store, but an hour after these numbers were logged, the book had dropped back one in each category and  was #13,252 in the paid section.

Now let’s pull back the curtain. How many books did we have to sell to reach those numbers?

On “launch day,” we sold 24 books, 21 in eBook format, three paperbacks. We had a few residual sales on the following days. All in all, the author made about $300—not enough to retire on by any means, but better than a sharp stick in your eye.

Using a tool from KDPRocket, I knew the top seller in his category sold approximately 45 books a month and the next top person sold an average of 24 books per month. My goal was to sell 50 books and I only made it to half what I wanted. I think a longer, more vigorous campaign would have brought me a lot closer to my goal.

On the plus side, we cracked the top 10 in three categories. Let me tell you what we had going against us and what we did that worked.

Most of the time, when you’re doing a “real launch” as opposed to this mini-launch, you want to give a discount on your eBook. Authors will drop the price of their eBook to $0.99 or even free for three to five days to get a large number of downloads. (Amazon tracks free and paid books separately).  We did not discount the book in any way, but there were a few perks which I will mention in a bit.

Not a New Book

This was a re-release of an older book. We touted it as the 25th Anniversary Edition. Some people feared that the information was out of date. I had edited the book and I knew that the strategies and techniques were just as useful today as 25 years ago. So that went on the back cover copy as well as in the description.

Author Did Not Participate in the Launch

The author is not a marketer. He loves the internet, but doesn’t understand (or want to understand) the ins and outs of internet marketing or book promotion. Not his thing. He is an older gentleman who likes to keep a low profile. In fact, the book is written under a pen name, so we couldn’t even use the author’s real full name.

There was no money put into advertising or promoting. No Google, Facebook or even Amazon ads. Sales were driven entirely by emails and a few posts on Facebook.

And, oh yeah, I forgot. UGLY COVER!  The author wanted the cover as close to the original as possible, so yeah, it’s just that dark green with very plain font and no picture or design. It is definitely NOT eye-catching!

I asked about six people to help me with the launch by sending out emails to their lists. Four of the six graciously said yes. One I never heard back from and one was semi-interested but his internet skills are on par with the author’s – sending out an email to his list is not an easy process for him.

I wrote two emails for them to send: one to be sent  two days before the launch telling their readers a book launch was coming up and one to be sent on the day of. (The emails talked a bit about the author, the history of the book, and how it would be useful to them.) I didn’t want to hammer anybody’s list with multiple emails and I appreciated that my friends were doing the send out with no JV monetary split. (There just isn’t enough room in book royalties to do a decent split—the money is in the upsell and there wasn’t any upsell to this launch.) While none of us has a huge list, we all had a targeted list of, in this case, real estate investors.

In addition, I and two of the others who sent out to their lists were “local” to this author. So while we didn’t use his full name, we used his first name, explained that he used a pen name on the book, and so we leveraged the author’s local fame. The other two partners are known on a national level and they have responsive lists. They are trusted authorities in their field and even people who have not met them in person follow their recommendations.

One of the people who did the email send out and I offered a couple of bonuses if people forwarded their Amazon receipt to us. The bonus was a special report pertinent to real estate investors and we both offered 15 minute free strategy sessions to buyers. I don’t know how much of a motivator that was for people. I had several people forward their receipts as did she.

The goal was to cluster the sales on one day, shooting for a four hour window in the afternoon. While we sent out the emails right before that time frame, you can’t count on people opening the emails immediately or even seeing them for a few hours. Our sales started building later in the afternoon. What helped keep it going was that I shared the numbers as the book moved up in the rankings and another friend shared a screen shot of the book as a “hot new release” which I also shared. (Say what you will about Facebook, they make it easy to share stuff!).

What I Would Do Differently

This book was problematic on a couple of levels, but mostly because we couldn’t discount it and because the author really wanted to remain anonymous. My next launch will use a book I’ve written. That will allow me to discount the book (I’ll do a free promo), which will open up a lot of the free promo Kindle send-out lists. This makes a huge difference in downloads.

Second, I will do a three-day launch as opposed to a one-day launch. That gives more time for book sales to build and catch some momentum. That will also allow me time to resend an email to the “un-opens” on my list.

I will be less shy about asking people to do an email send out for me. I only asked six people and I prejudged who would or wouldn’t send out. (The one person I was pretty sure wouldn’t send out, didn’t respond. Duly noted.) I might have asked some people with smaller lists to send out or even tapped some of the author’s old friends.

I didn’t capture the overall ranking number when I first started logging the rankings. Next time I will capture that AND I will also mark down the date and time of each ranking. Amazon updates every hour but it took a couple of hours to see the book show up in the rankings, even though the sales were coming in.

Over the next few months I will be testing various book marketing strategies and reporting on what worked and what didn’t. If you’re launching your book, I’d love to hear what you have to say.