Short Takes: Express Your Thoughts Without Being Interrupted 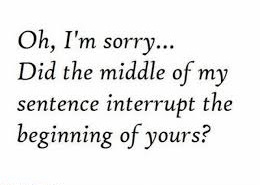 We live in a world filled with interruption. Interruption has become its own form of entertainment. Interrupters are rewarded. They’re the 15 second clip blasted out by every news outlet. They’re the outspoken pundit who is invited to every Sunday morning talk show.

The problem with interruption (outside of the fact that it is very rude) is that the person who is speaking doesn’t have the chance to put out his entire thought, to express the nuances and contingencies which may or may not lead to a more elevated level of debate. It reminds me of the Monty Python Argument Clinic sketch.

Writing a book allows you to lay out your ideas and the thought process behind them. It allows you to refute that first onslaught of objections or even open up lines of questioning at a level that will add to the value of the conversation.

Writing a book takes time. In speaking, we tend to shoot from the hip: thoughts pop up in our brains and shoot out our mouths. Later (sometimes only seconds later) we realize what we said is not entirely true or logical, doesn’t express what we meant clearly, or is sometimes dead wrong.

“Ill-considered” is a magnificent adjective. It is spot on. It is in-your-face. It is wholly present unto itself. Ill-considered words and actions are the product of haste, reaction.

Writing a book causes you to slow down, to ponder, to consider: Is this thought clear? Will this principle I am putting forth stand up to scrutiny? What other ramifications might there be or how might someone misconstrue this?

The very process of writing clarifies your thinking. It allows you to process and develop your thoughts without interruption.

Write your book and raise the level of civility and discourse in your field. The world could use that.

Your Book Should Be a Divining Rod
November 11, 2019
Receive the Latest Marketing, Writing, and Publishing News!
The Brilliant Content Planner