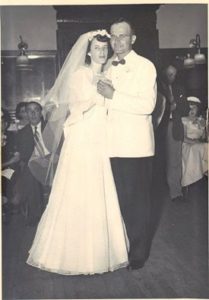 I was reading the Sunday paper (yes, some of us still read the paper) and there was an article about a woman who had played in the women’s baseball league back in 1942. There was a picture of her team, with the women all named and I thought to myself, “There was a lady from our town who played in that league. Mom would know her name. I have to ask her.” And then, of course, I remembered that I couldn’t ask my mom because she passed away several years ago.

I probably think, “I’ll ask Mom” or “Mom will know” at least three or four times a day. And then comes the realization that I can’t. (It’s funny how you know something and your mind still goes to that default thought.)

My mother had so many stories—about our family, about working when women didn’t really hold jobs, about the town she lived in for decades. She went through the Great Depression and every war from World War II on. As she aged, it seemed she told the same stories over and over again. Then one day, we were looking at a book our town’s historical society had put together, and there was a picture of the Hindenburg. She pointed at it and said, “They let us out of class and we all went onto the baseball field behind the school and watched it fly over.” I said, “WHAT?” She had NEVER told that story before. I thought, You’ve told me the story about you and Aunt Mary dragging poor Uncle Bob by his arms and skinning his knees ONE ZILLION TIMES and you never told me you saw the Hindenburg fly over our town on the day it blew up?

My father served in World War II. He met the princesses, Elizabeth and Margaret, while he was over there. Apparently they held teas for the servicemen. He also served on the same base as Clark Gable. “People were always mistaking me for Clark,” he’d say. I was young enough to believe him. Turns out, Dad more closely resembled Harry Truman. My mother, unsurprisingly, bore a strong resemblance to Queen Elizabeth. Dad passed away when I was 18, before I really had a chance to ask him about his experiences adult to adult.

I don’t write memoirs; I work with people on their business books. But there is such value in writing down the stories of your family, their experiences, yes, even their recipes. (I’d kill for my Nana’s pasta fagioli.) Humans have passed down stories since they could communicate. Stories trigger emotions that can bring back a loved one, a shared experience, the pride of accomplishment. They are stored knowledge: A story of a past hardship could help solve a modern day problem.

Our stories are a DNA chain, a connection to our past. Record your stories, your family’s stories, your friends’ stories in some way: write them, videotape or audiotape them digitally. When you are old, you can relive those stories and those people again and again. When you are gone, your children will have access to your knowledge. They’ll still be able to ask Mom.

Summary
Article Name
Stories are Legacies
Description
You've listened to family stories time and again. You will want to preserve them in some way before it's too late. Start now.
Author
Barbara Grassey

Your Book Should Be a Divining Rod
November 11, 2019
Receive the Latest Marketing, Writing, and Publishing News!
Sell More Books on Amazon